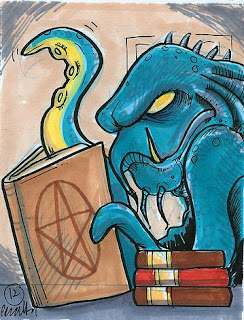 Caitlin R. Kiernan's 13 of the Top Ten Lovecraftian Films Not Actually Based (Or Only Loosely Based) on the Works of HPL:

4) Lemora: A Child's Tale of the Supernatural [Richard Blackburn, 1975]

2) Bram Stoker's Dracula [read first as a boy by a candlelight, when electricity had failed]

[I'm not really into horror in book form – unless you include Family Health, a fat encyclopedia which tells you of a thousand things of which you could die.]

4) Again, Frankenstein, by James Whale [with Karloff as the Creature]

5) Kubrick's Shining [some scenes of outstanding ghastliness, almost too horrific to watch]

6) Andersson's Songs from the Second Floor [my family did not find this Swedish funny; I love its delicious sly wit and its depiction of worldwide mental breakdown; surreal, unique]

7) Clouzot's Les Diaboliques [a rundown boarding school; chief characters: the headmaster, his rich wife, and a female teacher who becomes his mistress; the interplay between these three characters is chilling and motivated by human cruelty; full marks for a horrifying ending; tremendously wily direction of a classic!]

3) "The Beckoning Fair One", Oliver Onions

18) "The Night They Missed the Horror Show", Joe Lansdale

29) "The Girl With the Hungry Eyes", Fritz Leiber

2) The Killer Inside Me, Jim Thompson

6) Something Nasty in the Woodshed, Kyril Bonfiglioni

8) In the Electric Mist with the Confederate Dead, James Lee Burke

10) The Bible, by various authors [no disrespect meant or implied, but seriously… the loons who campaining for the banning of fantasy or horror novels ought to try reading this baby from cover to cover…]

1) The Omnibus of Crime, [edited by] Dorothy L. Sayers

5) Great Tales of Terror and the Supernatural, Herbert A. Wise + Phyllis Fraser

6) The Book of ories, Robert Aickman

Victor Salva's Ten Things We Have Lerned From Horror Movies: