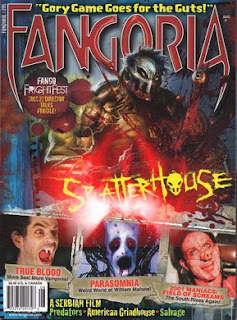 U sadržaju časopisa stoji: "From a country not known for its genre fare comes a movie that's hard to ignore!" 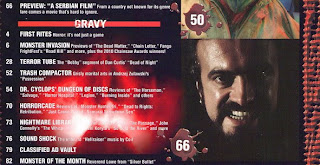 A SERBIAN FILM TO DISTURB YOU

Think you've seen it all? Then strap yourself in and prepare for the latest Eurohorror assault. 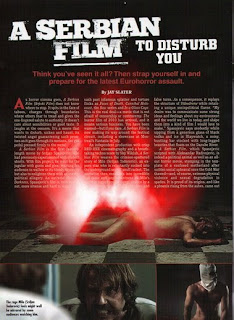 As horror cinema goes, A Serbian Film (Srpski Film) does not know where to stop. It spits in the face of taboos, charges through boundaries where others fear to tread and gives the one-fingered salute to authority. It doesn't care about sensibilities or good taste. It laughs at the censors. It's a movie that wants to disturb, sicken and haunt, its twisted angst guaranteeing such promises as it goes through its motions, the gas pedal pressed firmly to the metal.

A Serbian Film is the first feature-length movie by Srdjan Spasojevic, who had previously experimented with student shorts. With this project, he went for the jugular with gusto and glee, wanting his audience to wallow in its bloody depravity but also to enlighten them with an overtly political allegory. An extreme Heart of Darkness, Spasojevic's film is, believe it or not, more intense and hard to watch than such past infamous splatter and torture flicks as Faces of Death, Cannibal Holocaust, the Saw series and In a Glass Cage. This is the real deal-a movie that is not afraid of censorship or controversy. The horror film of 2010 has arrived, and it means serious business. You have been warned-but if you dare, A Serbian Film is now making its way around the festival circuit, including a showcase at Montreal's Fantasia in July.

An independent production with crisp RED ONE cinematography and a breathtaking techno score by Sky Wikluh, A Serbian Film weaves the crimson-spattered story of Milo (Srdjan Todorovic), an ex-porn star who is reluctantly sucked into the underground sex 'n' snuff racket. The narrative then nosedives into incredible bad taste and unpleasantness as Milo's world is turned upside down, shaken by a reality that is twisted by nightmares and false turns. As a consequence, it replays the structure of Videodrome while retaining a unique sociopolitical flavor. "My desire was to communicate some strong ideas and feelings about my environment and the world we live in today, and shape them into a kind of film I would love to make," Spasojevic says modestly while sipping from a generous glass of black vodka and ice in Blaywatch, a noisy, bustling bar stocked with long-legged beauties that floats on the Danube River. 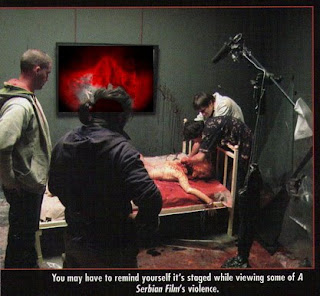 A Serbian Film, which Spasojevic scripted with Aleksandar Radivojevic, is indeed a political animal as well as an all-out horror movie, stomping in the template of a confused motherland after sudden social upheaval once the Cold War thawed -and, of course, extreme physical violence and sexual degradation in spades. It is proud of its origins, and like a phoenix rising from the ashes, came out of nowhere to stun the fest circuit into submission. The film benefits from the wonderful lead performance by Todorovic, who gives it his all in the role of the haunted Milo.

"In Serbia, we have some fantastic actors who rarely get a chance to participate in something this provocative and show their range," Spasojevic says. "They responded strongly to the ideas and metaphors in the screenplay, so they were great allies for us in making this film. Our lead, the great Srdjan Todorovic, actually had the toughest time on the set, because he had to be there for 90 percent of the shoot. He is one of the most popular actors in Serbia, and I believe this kind of role should only increase his popularity"- or kill it stone dead, if Serbia was a more conservative country.

The film's blistering assault on the senses also has a lot to do with Miroslav Lakobrija's old-school prosthetic FX, which challenge the extremes set previously by the likes of Tom Savini and Giannetto De Rossi. Lakobrija -who also worked on the Ken Foree vehicle Zone of the Dead- really got to work, his FX hammered home with the subtlety of a B-52 payload. They remain convincing and utterly genuine, leading A Serbian Film toward a rightly justified cause celebre status. With such a portrayal of hardcore physical and sexual violence, the question remains: Can a filmmaker go too far? Does an artist have a moral obligation and responsibility toward their audience?

"I'm not sure about general boundaries, but I know our story was leading us to the edge of the blade," Spasojevic says. "We danced and balanced on it as well as we could, and we nearly fell down into the abyss. My main responsibilities are for the governing ideas to be enforced without compromise, and that no one gets hurt or experiences any psychological trauma on the set in process."

But what about viewers? A number of women would claim otherwise, as previous screenings have infuriated the fairer sex. Indeed, festival directors have been known to harbor second thoughts about exposing women to A Serbian Film, given documented accounts of the movie visibly upsetting them-be it emotionally breaking down or responding with riot, fury and fire. Like Pascal Laugier's Martyrs, however, A Serbian Film depicts violence as suffering and a catalyst, not as an excuse to show gore for gore's sake. Either way, it takes a brave or foolish soul to screen A Serbian Film to an unprepared audience.

Certain of its splatter setpieces are Fulci-esque in their delivery. From gunshots to the head, arterial sprayings, skull-raping and -the most disturbing and a cinema first- the exploitation of a newborn baby, A Serbian Film is bound to pique the attention of censors worldwide. However, kudos are due to Spasojevic's skilled direction, in which the most outrageous scenes of depravity are only suggested in the way they are shot.

"It was never an intention to shock, but only to express our deepest and most sincere inner feelings about how strongly we in Serbia feel violated," the director claims in all seriousness. "For example, the baby scene represents us and everyone else whose innocence and youth have been stolen by those governing our lives for purposes unknown. In this scene, we only painted a literal metaphor of how we feel. This image is so extreme that it actually defames violence and nullifies its core. In a heavy special effects scene such as this, its sheer technicality killed all trepidation and impact for the people participating in it, so it was much more exhausting than shocking on the set. And, you know, I went exactly as far as I wanted in this scene." 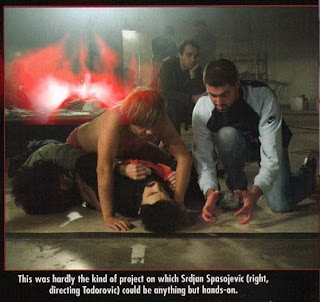 A Serbian Film also contains sex scenes that tantalizingly verge on the hardcore. Spasojevic grins like the cat that got the cream when it comes to discussing this subject: "It was never my intention to insert hardcore scenes. I was balancing on the verge of that line, but never really crossing it was always my directive." Smiling cheekily, Spasojevic backtracks a little. "Well, maybe there was some real sex during shooting, but I can't be completely sure. Perhaps not quite everything was under my control..."

In more conventional territories, A Serbian Film will no doubt be seen as completely out of control, a crazed beast unacceptable in any form. And the movie is a response to that attitude as well, Spasojevic waving an angry fist at authoritarian bodies that dictate what we can watch. "This film is definitely a strike toward censorship and authority that are suffocating any unorthodox creativity there is today," he states. "It also specifically addresses the fascism of political correctness so prevalent these days. That is the tool that kills free cinema.

"This is the kind of film that couldn't be made in an out-of-control fashion," he continues. "Everything was precisely planned and extremely controlled. The only way we could make this film right was to do it without compromising and concern about consequences. Still, it pains me that A Serbian Film could be banned in many countries."

Genre fans can be assured they're in good hands with Spasojevic, whose influences range from William Friedkin, Roman Polanski, Sam Peckinpah and Walter Hill to Brian De Palma, John Carpenter and David Cronenberg -and his horror education clearly shows in A Serbian Film. While it has yet to be shown in Serbia itself, the movie has taken by storm the venues where it has played so far, starting with its world premiere at South by Southwest earlier this year. "The reception has been fantastic in every possible way," Spasojevic beams. "The movie was understood in exactly the way I had intended, and we've had some great reviews and interviews. And for those who suggest women will hate the movie, we still have our old girlfriends!" he laughs as another shot of black vodka is ordered.

Sweeping aside the likes of Eli Roth's Hostel, A Serbian Film is also set to storm London's FrightFest as part of its summer festival blitz of carnage and despair - albeit one with significance. Spasojevic believes that Fango fans who have been reading its pages and viewing its gruesome images for years will be prepared for the monstrosity that is A Serbian Film- but we're still not entirely sure...