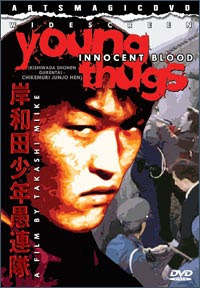 Story: Four friends (three boys and a girl) finish their high school, and find different jobs. Two of the boys end up doing small favors to the local thugs (like ‘convincing’ those in debt to return the money, protecting the obedient and fighting the opponents). The group is still more or less together until the main guy, Riichi, meets a girl who had a crush on him in high school. His previous girl dumps him, and the new one doesn’t like seeing him bloodied and swollen with bruises, so he has to obey her, and stop fighting. In the surrounding with so many tough guys (most of whom owe him a kick or two at least) being a pacifist is pretty hard…

Review: The story as described above might mislead you into belief that there is a straightforward narrative here. Not so with Miike. Firstly, the film is divided in two parts (‘summer’ and ‘winter’), portraying the events from dominantly male, and later female, perspective. Then, the time-line within both parts is broken through ellipses, flashbacks or Miike’s trade-mark out-of-the-left-field plot turns or surreal scenes. The story is pretty simple, but Miike’s complications more often than not seem to be there merely to hide its simplicity, or to alienate a viewer who might be lulled by a more conventional narration. Unfortunately, there’s a lot to be lulled by in Young Thugs, and not much to keep you awake.

To follow a film like this, the viewer needs a hook: either characters, or intriguing story, or a strong visual style, or a barrage of powerful imagery (which may or may not make much sense). Let’s see. The characters are decent, even likable youngsters, and you don’t find those often in Miike’s films. The actors provide quality performances, considering what they’re given to work with. The story, however, is just nothing new or worth writing home about. This is a predictable socio-drama about the troubles of growing up in Osaka, but its social aspect is diminished since the screenplay does not provide the character’s backgrounds or a clear idea about the city they live in, while the drama part is undermined in several ways. With no background, no back-story, starting in medias res, we never really understand why those young people have to become Young Thugs. If there is to be a tragedy, it must arise out of a protagonist’s decision – but we never really feel what makes them tick. The disjointed narrative is about ‘a bunch of stuff that happened’ (to borrow Homer Simpson’s phrase), with no clear idea of how or why. This is basically a drama, with far greater stress on characters and, for lack of a better word – ‘realism’. However, it is seriously undermined precisely by what makes the film most watchable – that is, Miike’s weird touches. Which brings us to a paradox: Young Thugs might’ve been a more consistent and to-the-point film in the hands of a more conventional director, but that would make it just another trite delinquent movie with predictable situations and even more predictable morals; on the other hand, the only reason to actually watch Young Thugs are precisely the scenes that seem to belong to a different movie.

The films opens with a pleasantly humorous scene in which Ryoko ‘seduces’ her teacher only to ridicule him on the last day of school. Wickedly funny, it reminded me of some tamer moments of Visitor Q. It is followed by a string of quick cuts in the middle of a violent fight, and pretty soon a character’s bald head receives copious vomit in close up: for a while it seems that we’re in the familiar Miike strangeland. But then the ‘serious’ (or, more accurately ‘pathetic’) melodrama kicks in, and then it’s ‘Good night and sweet dreams: wake me up if something actually happens’. Gradually you lose interest in the characters and their plight, because of the uneven tone and an unhappy mixture of realism, surrealism, violence, romanticism, drama, tragedy and comedy. When, at the end of Dead or Alive people start fighting like cartoon characters and an –out of nowhere- bazooka becomes a weapon of mass destruction, it is consistent with the mocking tone pervading most of that movie. When at the end of Young Thugs a character shits his pants after a suspenseful car chase and is –out of nowhere- stricken by the lightning, it is so inconsistent with the rest of the movie that the little impact the film may have had by then simply goes down the drain.

With no eye candy or a steady flow of memorable images to provide a nice package to an otherwise problematic content, Young Thugs remains a cheap direct-to-video fodder that is competently made, but with inspired touches too few and far between. Basically, this is one of the lesser Miike flicks which the fans will probably watch no matter what, while the uninitiated or insecure are advised to rent the DVD before buying, or skip it altogether.

DVD [ NTSC, Region 1] : You should not have great visual or aural expectations from a very low budget film shot on video: the colors seem subdued and the image occasionally lacks vividness and detail. Yet, considering the source, I’m not sure if a much better work could be done with it anyway. It’s in original 1.85:1 ratio, and the sound is in both 2.0 and 5.1 (none of which adds much to this average film). The disc contains the trailer, biographies, scene selection, cultural information on the city of Osaka (which should’ve been artistically shaped and presented in the film itself, instead as a footnote here) and 17-minutes of Miike interview. By far the most interesting among the supplements, it reveals his fondness for this particular title, as well as the period in which it was made: Miike seems to long for the days when he was more spontaneous and not so tech-savvy as today. Still, this viewer did not feel much to long for in Young Thugs… 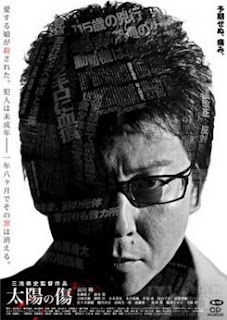