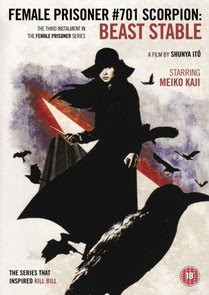 Story: Some 'prisoner'! Matsu the Scorpion (Meiko Kaji) spends most of her time running away from the cops and criminals (usually equally sleazy and interchangeable!), and pissing off the bossy prisoners if/when temporarily imprisoned. This time, in the third part of the series, she is offered a hiding place with a prostitute who's pregnant with her mentally challenged brother's child. Matsu is captured by the colorful criminals and put in a cage with ravens. As usual, it doesn't take long before she escapes, leaving blood-sprayed walls and white sheets behind. Forced to hide in the sewers, Matsu is helped by the prostitute who brings her food, but the police follow her trail and prepare one last trap, filling the sewers with gas and lighting a match… 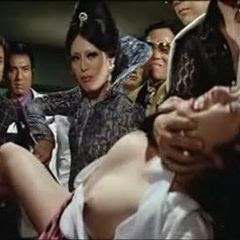 Review: The film opens with one of the all time greatest credits scenes: caught and handcuffed by a cop in the subway, Matsu severs his arm with a knife and runs away with it still attached to her wrist. She's running through half of the city with a bloody arm dangling around her while the great "Urami Bushi" theme song is playing over the credits. Yeah, it doesn't make much sense (talk about drawing attention to yourself!), but the FEMALE PRISONER series is not about making sense, it's about looking beatufil and cool while being outrageous. The first three parts of the series, all directed by Shunya Ito, firmly reside on the border between fanciful exploitation and art cinema, providing a full spectrum of cinematic pleasure for the viewer inclined towards the weird, unusual, irrational.

BEAST STABLE is slightly more restrained in terms of excessively surreal imagery, but that's only in comparison to the previous part (FEMALE CONVICT SCORPION: JAILHOUSE 41), which is matchless and best in the series. On its own, it is a non-stop sequence of wonderful imagery with vivid colors, imaginative framing, quick editing, fine camping, and unpredictable bursts of ultra-violence. The characters, situations and actions are ove the top, but that's exactly what makes this series a darling among the fans of real good exploitation (Tarantino included). Let's check some elements of this concoction. Severed arm. Prostitution. Tits. Retards. Rape. Boiling water in the face. Golf club genital torture. Ravens. Gynecological punishment. Scalpel revenge. Trial by fire. Psychological torture. Razor strangling. And much more. No one can call Shunya Ito an underachiever! He delivers!

And talking about delivery, Meiko Kaji delivers, too. She's at the top of her game, mostly silent, but with expressive features and developed body language which speak volumes. She's certainly one of the coolest characters of action-crime genre ever, anywhere, and is a joy to watch in every second she's onscreen. The violence and extreme content in the film are beautifully stylized so as to be enjoyed as fantasy (after all, this series is based on a manga): you won't feel dirty after watching the film, but will beg for more.

And more comes in the fourth part, FEMALE PRISONER SCORPION: GRUDGE SONG, but, unfortunately, it's not directed by Ito, and it shows. Meiko Kaji is still there, so it's certainly worth watching, but the direction is not so stylish (except for the ending, which is so overripe it's just ridiculous). The screenplay provides some really out-of-place moments, like the sub-plot about Matsu's love affair (!), and the flick is not even dynamic or eventful enough to fully satisfy those spoiled by the first three parts, although it's decent enough for fans of this kind of entertainment. 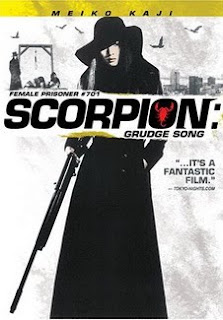 DVD [NTSC, Region 1]: FEMALE PRISONER SCORPION: BEAST STABLE is presented in an anamorphic widescreen with the film's original 2.35:1 aspect ratio preserved. Made from a solid print, it shows off vivid colors and fine contrasts. The sound is only Japanese (who would want an English dub anyway?), in Dolby Digital mono. Translation and subtitles are excellent and make the enjoyment of the film a smooth ride. It could use some more extras (like, commentaries or interviews), since it that department all the disc offers are trailers, scene access and image gallery. The same kind of extras are there on the GRUDGE SONG disc, too, but it must be said that the image of that film is not presented so perfectly (dark scenes are too bright, with weak contrasts). If you had to choose only one of these two, there's absolutely no doubt which to take (Part three! Part three! BEAST STABLE!), but lovers of the series and completists will (understandably) want both of these, and won't regret the decision.