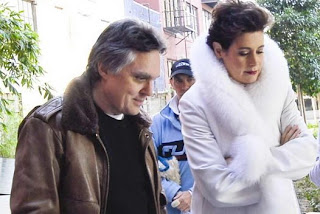 You may recall my review of PARASOMNIA.

Now a polished version of it is online in English, too – at Beyond Hollywood. Click HERE to read my English language review of PARASOMNIA.

Well, that film's director, William Malone, came accross it (probably over the link at the IMDb), read it by the use of some translating tool (I didn't know you had those even for 'obscure' languages!) and – wrote an e-mail to me!

That's the first time that a non-Serbian director responded to my review of their film. Since my feelings towards PARASOMNIA are largely positive, and since Bill Malone turned out to be a nice fellow with an obvious passion towards film, we exchanged a few e-mails. I decided to publish them here, with Malone's approval: I think they will shed some further light on the film, its origin and its uncertain future, its maker and his intentions.

So, here's the exchange between Bill Malone and me. Enjoy it – and try to see his film in some legal, non-pirated way if at all possible! This film deserves all the support it can get!

Please forgive me for writing in English but my Serbian is really quite terrible.

I came across your website, and noticed your review of my film Parasomnia. I wanted to write you a note to thank you so much for your very kind words and thoughts. It means a great deal to me and to all of us involved. The response to PARASOMNIA, so far, has been very rewarding. I want to thank those who took the time to watch the film and enjoy it on its own terms without preconceived ideas of what this film is or is not. The film took nearly 2 1/2 years of labor... and I'm thrilled that many of you have responded so favorably... For those who don't like it, I can only promise to try harder in the future.

This movie was not made by a studio machine. This film was made by people who love film and love the possibilities of film. It was financed and made by myself and my friends who thankfully shared a common dream. We wanted to make a film where we could control our own destiny... make our own decisions... Right or wrong. If those decisions were wrong than at least they were our decisions. I and most of my friends have suffered many times at the hands of critics and in the press, for things that we had no control over. This was our response, and I can only hope that many of you enjoy it.

All my sincere thanks to you and all your readers.
(...)

at first I thought this must be some kind of prank or spam, but then realized that your mail must be genuine. In any case, this is the first time a foreign (non-Serbian) filmmaker has responded to my review. I guess you were able use some net tool for translating the text and getting the rough idea of what it says there in Serbian.

In any case, it is true: I did enjoy your film and the review is predominantly positive. I enjoyed it precisely because it was unconventional, original, visually stunning and emotionally engaging. All the things usually lacking in today's horror coming from America.

I do not want to take too much of your time by my babbling, but would like to thank you for your kind words. I sincerely hope that PARASOMNIA will be successful enough for you to pursue this line of unconventional and fresh horror. I wish you all the best with the film and in your career. Feel free to inform me, if you care, of festival screenings, awards and the like.

Occasionally I write for the site BEYOND HOLLYWOOD (www.beyondhollywood.com) and will be happy to break some good news there. As the matter of fact, I just realized they haven't reviewed your film there: I'll translate my review to English and publish it there some time next week, as I'm on a vacation right now. It's a pretty big and popular site for those who like movies that are beyond the usual Hollywood crap, so PARASOMNIA will fit in perfectly there.

I sincerely appreciate your response. I really got from your letter that you love film as I do. It’s great to have fresh voices out there in the world contributing to the Sense of Wonder that is the motion picture. Often filmmakers who work within the Hollywood system get painted with a single brush. I sense that you approach is very different than that... and it is appreciated.

One of the things you should know is that there are a numbers of us who have to work here, that feel that the Hollywood system, that turns out films like toilet paper, is very oppressive. If you don’t want to fit into a little box you will be made to pay for it. Parasomnia, as I may have mentioned is a response to that oppression. This truly has been a labor of love for all involved.

I got enough from the translation software that there were things that you liked and things that you liked less. I am perfectly good with all of that and I really appreciate all of your words good and bad. Let me know if there is anything that you need for your other articles. All the Best with your websites... And more importantly your vacation. (I think my last vacation was in 1923.)

it is agreed: I will write a review for BeyondHollywood.com (in English, of course). I dare not imagine what the google translation looked like: my blog writing is extremely juicy, idiomatic and idiosyncratic, with puns and allusions that were certainly lost in translation. I'm sure it looked worse and more nonsensical than it is in Serbian.

1) What is the future of PARASOMNIA? Release? Festivals?

2) Would you mind if I published our little correspondence on my blog? I'm sure my readers would be amused, and after all, your e-mails did not contain anything personal or private, or so it seems to me. But if you want me to exclude some parts, or to keep this thing for myself, I will.

Sorry for not getting to you sooner. I’ve been consumed with details on the promotion of my film.

I have no problems with you publishing my notes to you. In any case, I would love to see your complete review in English so please send it a long to me when you get a chance.

Thanks for removing the “spoiler” photo. This was one of the few images that we tried very hard to not to give out to the press. I have to be careful with these things. I did a short film as part of a collection of films called “Masters Of Horror”. In the show that I did (“Fair-Haired Child”) the publicity department sent out pictures of the creature in the film and called it “the Johnny Thing’. This completely ruined any twists or turns in the story. I got a number of critics saying that there were no surprises. Of course there were no surprises, the publicity people gave it all away with the trailer and the pictures they put out. Further they were saying that the lead girl was supposed to be13 years-old. A lot of critics slagged the actress for not pulling off being 13. She was NOT supposed to be 13. She's playing a girl who was in the last year in high school. This is why I’m a bit cautious about what goes out (probably overly cautious... So I apologize). But again thanks.

Re: The future of Parasomnia... It's a bit uncertain as this is a difficult time for indy filmmakers. There are very few options to get your film seen. This is further complicated by piracy which can seriously damage sales of the film. Outside the US we have done better than most films as far as sales go. The U.S. is a very different matter and at the moment a very unfriendly environment for small films. The audiences have been very enthusiastic toward PARASOMNIA and we have received great reviews of the film. Still and all, we have not been able to put together US distribution deal that makes any sense. I can only hope that an angel comes along soon and blesses us.

Again thank you for your very kind interest in the film.

Writer/Director
PARASOMNIA (Dreams of the Sleepwalker)