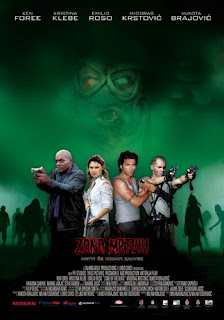 ZONE OF THE DEAD is a disappointing film about zombies. Yes, another one of those cheap knock-offs too preoccupied with their obvious homages to actually deliver something original.

This is one of those flicks in which characters have names after genre greats; here we have agents Savini and Bottin, while the female lead is called Mina Millius. Pity that neither the make-up effects nor direction in this film are anywhere near the works of invoked masters.

This is one of those flicks in which they just put make up on a bunch of friends and family members who are too happy to clown around, each playing their own version of a zombie, but with no real coordination or training that real stuntmen and extras would have.

This is one of those flicks in which shaky-cam is so over-used you are bound to feel at turns frustrated, nauseous and angry at the stupid directorial choice to spoil every action or gore set-piece by making it unwatchable.

Make-up effects by Serbian maestro Miroslav Lakobrija are not too inspired in their design, but are quite fine in their execution, and there was no need to hide them by shaking the cam so frantically every time a zombie appears.

The plot is your usual been-there, done-that: a stupid brawl causes an accidental chemical spill in a Serbian industrial town which creates armies of people with bad skin and tattered clothes. In the middle of that are the stock characters copy-pasted from the manual SCREENWRITING FOR DUMMIES: ''grizzled (ex-)cop/agent (with dead/divorced wife, trauma from the past, popping pills etc.) –comes across trouble on the last day of work before pension'', played by Ken Foree (DAWN OF THE DEAD). He accompanies ''a rookie assigned to an important mission/investigation'', female agent Millius (Kristina Klebe – Rob Zombie's HALLOWEEN) who has a predictable character arc – from a frightful, clumsy woman to a SigourneyWeaver-like action hero shooting with guns in both hands. 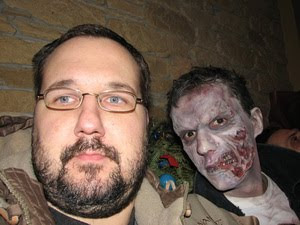 Ken Foree is probably the only reason anyone would want to see this otherwise unimpressive flick; after all, this is his first chance, after Romero's classic, to fight the undead. Sadly, the unspirited script does not provide him with much to do, although Foree is among the rare professionals in this crew, and his charisma is still up there on the screen. Nothing of the kind can be spotted in any other "actor" here. Serbian character actor Miki Krstovic comes close, but wait until you see the embarassingly clumsy and unintentionally hillarious scene of his turning into a zombie...

The film lacks attitude of any kind, and although nominally situated in Serbia, it has little to none of the local color or relevance. The authors keep invoking Carpenter's ASSAULT ON PRECINCT 13 as their main inspiration, but somehow they failed to create a comparable tension and suspense: ZONE OF THE DEAD is one of the dullest and most uneventful siege-movies you'll ever see. Also, there is none of Carpenter's cynicism or "fuck the authority" attitude: actually, this is a rare zombie flick in which the president is a good guy (!) and the military is positive/neutral.

There have been some very good Serbian horror films, like DEJA VU (1987) or T. T. SYNDROME (2002), and there are some good ones coming later this year. ZONE OF THE DEAD is not one of them. In terms of its overall accomplishment (or lack thereof), it comes closest to the cheap, ugly Italian flicks by Bruno Mattei, like HELL OF THE LIVING DEAD and ZOMBIE 3. There is some irony in that: aiming at Carpenter and Millius, but ending in the Mattei territory.

But, who knows: if enough people are fooled to rent ZONE OF THE DEAD on DVD because of Ken Foree, the planned sequel might reach the level of, say, Umberto Lenzi. One can always hope.